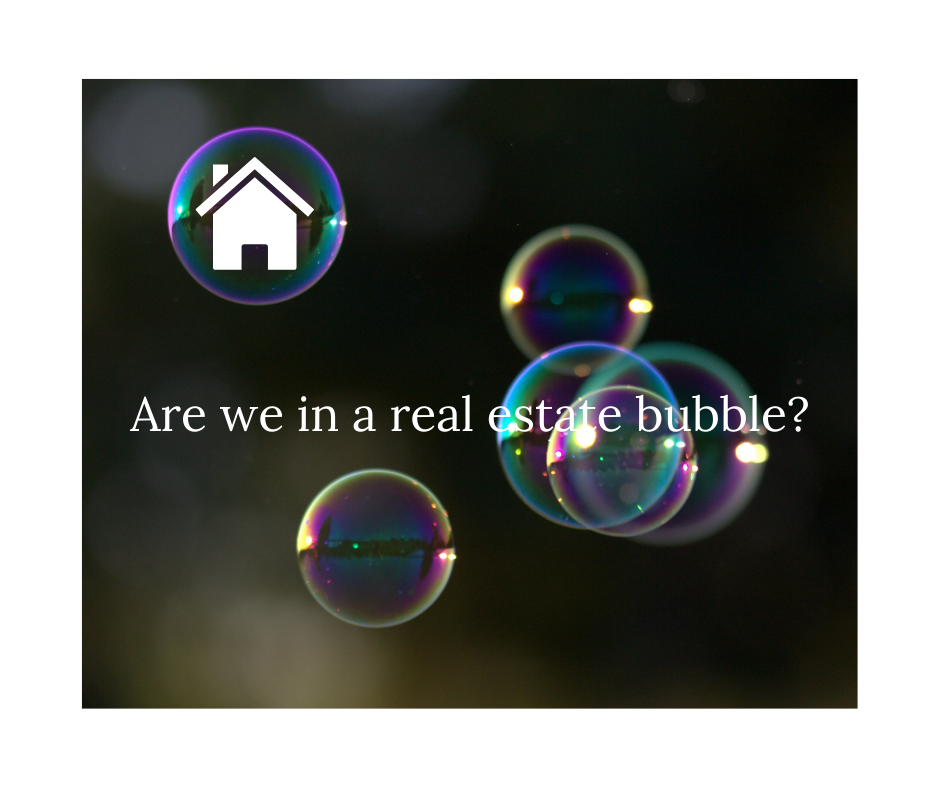 Our agents out in the field are seeing bidding wars, offers well above asking price and buyers willing to waive all contingencies to get the house of their dreams!  Our office even saw one home have an offer  $150,000 over asking price.  Crazy right?  It does raise a lot of questions.  The most frequently asked question is… Are we in a bubble? and when is it going to pop?   The parallels between today’s market and the real estate market of 2006 are hard to ignore.   One hopes we are not in a bubble, because when the last one burst, it triggered a global financial crisis and what at the time was the deepest economic downturn since the Great Depression. For most Americans, a home is their most valuable asset—as well as the collateral for a pile of debt. If housing goes down, so does the economy. “Real estate is suddenly pretty bubbly in almost every interesting market in the world,” said bearish investor Jeremy Grantham at a recent Morningstar Inc. investment conference in Sydney. “Eventually there’ll be a day of reckoning.”  To figure out whether U.S. housing is due for a correction requires digging into a hundred factors, from the rate of household formation to the output of lumber mills. And it’s unclear in which direction those signals are pointing. There’s one very big difference between then and now, though: Mortgage loans are much harder to get. An index of mortgage credit availability reached almost 870 in June 2006. This March it was just 125. Lenders have raised lending standards even beyond the requirements of the Dodd-Frank Act of 2010, which was passed in response to the financial crisis. Loans are smaller in proportion to house values and borrowers’ income. Borrowers’ average credit scores are higher. And you can’t bluff your way into homeownership with a no-doc or low-doc loan—i.e., one that allows you to attest to your creditworthiness without providing full documentation. The upshot is that while house prices could flatten in the next few years, the conditions for another crash are absent. Rather than over-easy credit, the main factors in the current price runup are tight supply and strong demand, both of which are likely to continue.  Tight supply is still an issue in Middlesex county only  13,970 single family homes were sold between May and mid July.  This was significantly below the pre-pandemic numbers of 2019 by 1,000 and the amount of buyers we see trying to enter the market is extremely high!

According to Bloomberg News, the biggest threat right now to the housing market is a sharp increase in the current ultralow mortgage rates, which have moderated the impact of rising home prices. It’s not an imminent risk, though. The Federal Reserve has bought almost $1 trillion in mortgage-backed securities to keep mortgage rates down since resuming its purchases in March 2020 and doesn’t plan to stop anytime soon. The Mortgage Bankers Association predicts the rate on the average 30-year fixed-rate mortgage will rise from 3.1% this quarter to 3.5% at the end of 2021 and 4.2% at the end of 2022. (The rate averaged 6.4% in 2006.)

Also on the plus side, only about 0.1% of mortgage loans issued this year carry adjustable rates, compared with about 60% in the bubble years. So homeowners today won’t be shaken out of their homes by rising rates.

Soaring home prices may not be as destabilizing to the financial system as they were in the last bubble, but they do contribute to rising inequality by boosting the wealth of homeowners at the expense of renters. CoreLogic Inc., a data provider, estimates that homeowners’ equity in mortgaged homes increased 16%, or $1.5 trillion, last year alone. It says only 2.8% of people owed more on their mortgages than the homes were worth at yearend, down from 26% who had negative equity in late 2009. That makes the market less fragile. Most people who can’t make payments—say, because of a job loss—can sell at a profit and avoid foreclosure.

There are conflicting signs as to whether the past year’s runup in prices is losing momentum. The Mortgage Bankers Association’s index of applications for mortgages to purchase a home (as opposed to refinancing) fell to 269.6 in the week of June 4, down from 342.8 in the week of April 16. Downturns in mortgage applications usually presage downturns in purchases of existing homes a month or two later, says Michael Fratantoni, the association’s senior vice president for research. On May 19 the group predicted that median sales prices of new and previously owned homes will be slightly lower in the fourth quarter of 2021 than in the current quarter. The National Association of Realtors’ index of pending home sales, a forward-looking indicator, fell 4.4% in April and is down 19% from its August 2020 peak.

“In the last couple of weeks, things have slowed down a little bit. It feels like we’re reaching the peak in terms of how competitive the housing market has gotten,” says Daryl Fairweather, Redfin’s chief economist. “People are kind of burnt out,” she says. “This summer we won’t see things be as absurd as things were in the first half of the year.” Then again, the rally may still have some running room because the market remains drum-tight. There were only 2.4 months’ worth of previously owned homes for sale in April at the then-current sales pace. The low in the bubble years was 3.6 months (though one reason for the decline is information technology that enables faster turnover).

Edward Pinto, a resident fellow at the American Enterprise Institute, predicts that prices will rise by as much as 18% annually through July, and that in 2022 prices will rise about 10%. “I think we’re going to see quite a bit more price appreciation,” says John Burns, chief executive officer of John Burns Real Estate Consulting, without giving a number. That, he says, “will make the market even riskier.”

One reason to expect things won’t loosen up right away is that the tightness has been years in the making. Having overbuilt in the 2000s, chastened homebuilders underbuilt in the 2010s, according to a calculation by Burns of the number of housing units added per additional adult in the U.S. population.  And now millennials, the largest generation, are reaching their peak homebuying years at a time when starter homes are in the shortest supply. On June 7, Bank of America Merrill Lynch estimated that only 65,000 starter homes were completed in 2020, less than a fifth the number built annually in the late 1970s and early ’80s. Investors who want to buy and rent out homes for the cash flow are an additional stress on the market because they reduce the supply of existing homes available for purchase. Since 2019, housing demand has been driven “almost equally” by investors and homeowners, Burns estimates.

The pandemic has also left its imprint on the housing market. High lumber prices because of last year’s mill shutdowns have added almost $36,000 to the price of a new home, according to the National Association of Home Builders.

There’s definitely speculative froth in today’s market. An April survey of consumers by the University of Michigan found that the average expectation for house price increases over the next year was 3.5%, the highest since the question began to be asked in 2007. If house prices flattened or fell, some shoppers would undoubtedly hold off to see if they could get a better deal, exacerbating the downturn. On the other hand, conservative mortgage underwriting limits the risk of cascading defaults. Houses are expensive, all right, but this doesn’t look like a dangerous bubble.

BOTTOM LINE according to the experts and in line with what our Farrelly agents are seeing- Home prices are rising at an even faster pace than in the lead-up to the last housing crisis, but by some key measures there’s less risk of the bubble being popped in 2021.  Call us to understand your own real estate goals and how they can fit into the current market.  We personalize a plan for each client and work tirelessly to make sure your biggest asset and you get the attention you deserve. (978)664-3700.